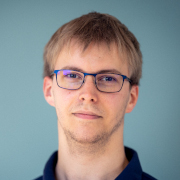 I did my PhD thesis in the TADaaM team in Inria Bordeaux Sud-Ouest, under the supervision of Alexandre Denis and Emmanuel Jeannot.
I worked on interactions between task-based runtime systems and communication libraries for High Performance Computing, especially StarPU and NewMadeleine.
I developed two main directions in my thesis:

To be able to optimize broadcasts appearing in task graphs of StarPU applications, we developed what we called dynamic broadcasts. Functions such as MPI_Bcast cannot be used within StarPU, mainly because recipient processes do not know wheter data comes from a broadcast or a regular point-to-point request, and in the same fashion they do not know other nodes involved in the broadcast. Thus, only the original sender node has all informations to be able to call MPI_Bcast. Accurately detecting broadcasts in the task graph is not straighforward neither.
Our dynamic broadcasts overcome these constraints. The broadcast communication pattern required by the task-based algorithm is detected automatically, then the broadcasting algorithm relies on active messages and source routing, so that participating nodes do not need to know each other and do not need to synchronize. Receiver receives data the same way as it receives point-to-point communication, without having to know it arrives through a broadcast.

Memory contention between computations and communications


I defended my thesis On the Interactions between HPC Task-based Runtime Systems and Communication Libraries on November 29, 2022. The manuscript is available, the slides as well.

Authors are sorted by alphabetical order.

A complete list of my publications is available on HAL.